What Actually Occurred in the Garden? 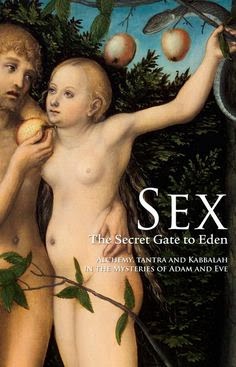 The following is more exegesis on the garden story in Genesis.  Here is where the war--between the two bloodlines (Jesus and Satan)--began, which is headed for a denouement (of course).

Genesis 3:6 says: "And when the woman saw that the tree was good for food, and that it was pleasant to the... eyes, and a tree to be desired to make one wise, she took of the fruit thereof, and did eat, and gave also unto her husband with her; and he did eat." Earlier God had told Adam (and Eve) not to listen to anything that Satan had to say: they were to avoid the adversary.

Eve was the one who brought up the idea of sex when we read (3:2), "And the woman said unto the serpent, We may eat of the fruit of the trees of the garden: 3But of the fruit of the tree which is in the midst of the garden, God hath said, Ye shall not eat of it, neither shall ye touch it, lest ye die." Notice that she added the last part about touching, which God had said nothing about. You see, sex was on her mind. She found Satan to be quite attractive. (In a context like this, when someone brings up the idea of "touch," it has to understood as pertaining to things sexual.)

The trees in the garden are symbolic of people.

Ezekiel 31 says: "2Son of man, speak unto Pharaoh king of Egypt, and to his multitude; Whom art thou like in thy greatness?

3Behold, the Assyrian was a cedar in Lebanon with fair branches, and with a shadowing shroud, and of an high stature; and his top was among the thick boughs.

4The waters made him great, the deep set him up on high with her rivers running round about his plants, and sent out her little rivers unto all the trees of the field.

5Therefore his height was exalted above all the trees of the field, and his boughs were multiplied, and his branches became long because of the multitude of waters, when he shot forth.

6All the fowls of heaven made their nests in his boughs, and under his branches did all the beasts of the field bring forth their young, and under his shadow dwelt all great nations.

7Thus was he fair in his greatness, in the length of his branches: for his root was by great waters.

9I have made him fair by the multitude of his branches: so that all the trees of Eden, that were in the garden of God, envied him.

10Therefore thus saith the Lord GOD; Because thou hast lifted up thyself in height, and he hath shot up his top among the thick boughs, and his heart is lifted up in his height; 11I have therefore delivered him into the hand of the mighty one of the heathen; he shall surely deal with him...

18To whom art thou thus like in glory and in greatness among the trees of Eden?"

The above passage from Ezekiel 31 is speaking of Satan and explains why Eve would have been physically drawn to him.
Posted by The Sunsaints at 2:00 PM No comments: Links to this post